Air traffic currently contributes around 3% to 5% to the total anthropogenic warming, depending on which climate-relevant substances are considered. And Its pollution is forecast to triple by 2050.

Flights to, from and within the EU account for around a third of the climate contribution of civil global aviation. 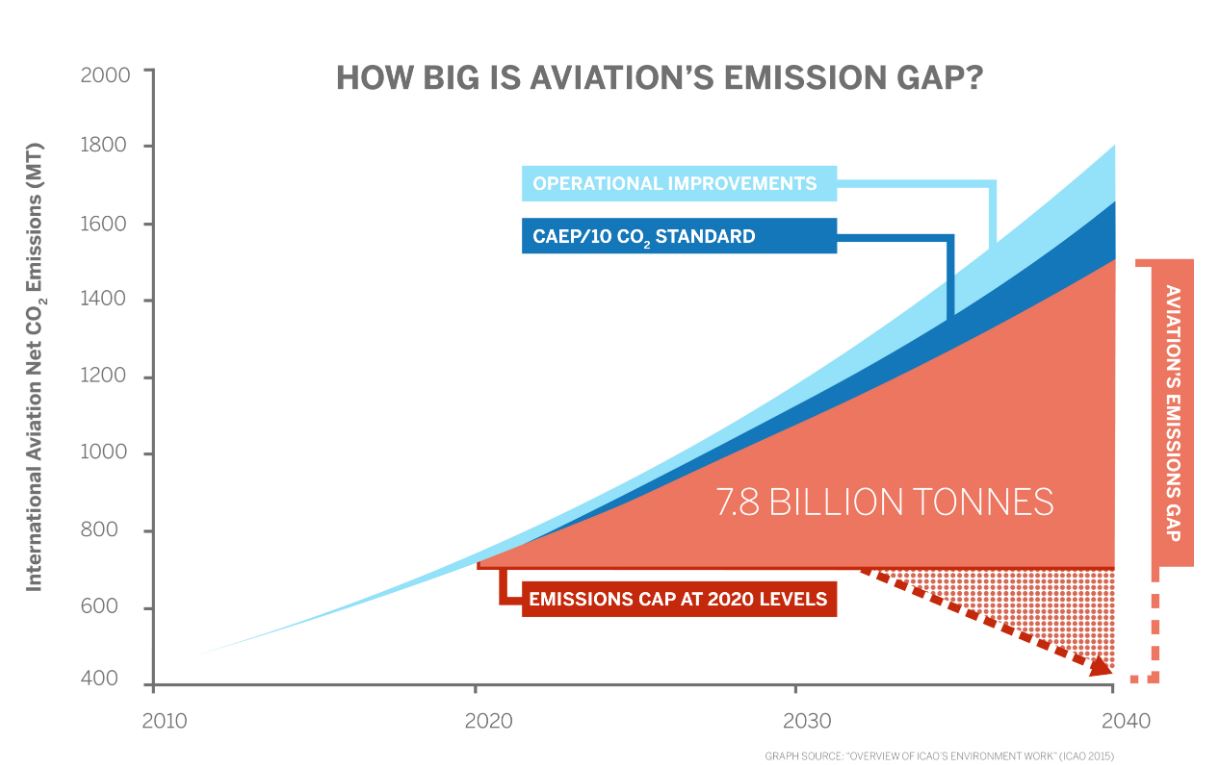 Since 2012, international aviation has been included in EU emissions trading to limit CO 2 emissions. According to Directives 2008/101/EC and 2009/29/EC, the CO 2 emissions of all flights to, from and within the so-called EEA countries (the European Economic Area includes the EU plus Norway, Iceland and Liechtenstein) are subject to a number of exceptions – the emissions trading obligation.

The International Coalition for Sustainable Aviation (ICSA) is the UN organization for civil air transport and thus the world’s highest political decision-making body for this type of transport. In autumn 2013, the 38th ICAO General Assembly decided to develop a global market-based measure (GMBM) to limit CO2 emissions from aviation. This goal was to implement it by autumn 2016 so that the climate protection instrument can come into force in 2020.

In December 2015 in Paris, nations agreed to cut carbon pollution within their borders and hold the increase in the global average temperature to well below 2°C above pre-industrial levels and pursue efforts to limit that increase to 1.5 °C. However, the Paris Agreement didn’t address what should be done about the pollution spewed out of aircraft that flies between different countries.

The ICSA plan to cut aviation global warming pollution requires further development of the the currently applicable EU emissions trading directive for aviation and its enforcement in the EU member countries.

Air transport is essentially a cross-border mode of transport and is subject to intense international competition. It differs fundamentally from rail and road traffic.

The shifting of passenger flows to hubs outside the EU is tantamount to shifting CO₂ emissions to third countries, so-called carbon leakage.

The goal of CO₂ neutrality by 2050 will be achieved – despite further traffic growth – through a bundle of complementary measures:

Improvements in technology: New propulsion systems, more efficient engines, lighter materials and other advances in aviation technology can lead to a reduction in CO₂ emissions. Depending on the scenario, these measures can account for between 12 percent and 34 percent of the necessary CO₂ savings by 2050.

Efficient operation: 7 to 10 percent of the CO₂ reduction can be achieved through improvements in operation. Increases in efficiency are possible at all points in air traffic operations, in the air (e.g. increasing aircraft utilization), on the ground (e.g. using ground power, reducing taxi times) and in air traffic management (e.g. avoiding detours and waiting patterns). ).

Alternative aviation fuels: SAF represent the greatest lever and the most important measure for reducing CO₂ emissions. Since the market ramp-up of these fuels will take some time and availability in the required quantities is not expected until late, the reduction of CO₂ be supported by compensatory measures (offsets, more on this from p. 30). By 2050, between 53 and 71 percent of the CO₂ reduction should be made possible through the use of alternative aviation fuels.

Compensation: CO₂ compensation through market-based instruments will continue to play a role in compensating for all those CO₂ emissions that cannot be avoided through technical innovations and improved methods of reducing consumption or by replacing fossil kerosene with CO₂-neutral fuels . Compensation reduces the remaining 6 to 8 percent CO₂ emissions.

Decreasing CO2 emissions at the airport

EU airports make a contribution to reducing emissions on the ground. E.g. between 2010 and 2021, German airports were already able to reduce their CO₂ emissions by 35 percent.Emission reduction levers include:

<blockquote class=”check”>You may find this useful: As a customer using zero emission taxis or eco airport transfers reduces the CO2 emissions of the airports. Using airport transfer service you can request an eco taxi transferairport24.com</blockquote>

The airports have also set themselves goals for the future:

Rating
( No ratings yet )
0 111 просмотров
Liked the article? Share with friends:
You may find this interesting
Environmental Issues 0 136 просмотров
Caring for the ecology of the planet has ceased to be just a fashion,