Caring for the ecology of the planet has ceased to be just a fashion, but has become a necessity for all mankind. The amount of household waste in the world’s oceans is approaching a critical point, which causes panic among environmentalists.

The first assumptions about the formation of garbage patches were made by experts in the late 80s of the XX century. The simplest theoretical studies of the currents in the Pacific Ocean have revealed “calm zones” of the waters, and then garbage lingers in them.

The largest Garbage Patch is located in the Pacific Ocean between Hawaii and California and is growing rapidly. Today, its mass exceeds three million tons, and the area is spread over hundreds of thousands of square kilometers. 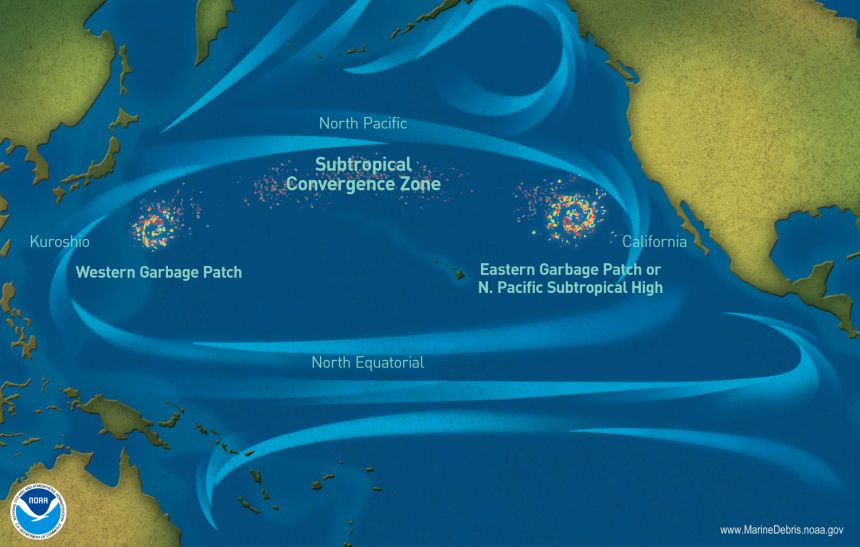 The Great Pacific Garbage Patch is the world’s largest dumping pot. Due to undercurrents with eddies, it is stationary and is a funnel that sucks in new debris. The patch is located 500 nautical miles off the coast of California, runs through the North Pacific Ocean past the Hawaiian Islands and almost reaches the coast of Japan.

Large-scale ocean pollution began with the spread of plastic in the 1950s – plastic that takes 20 to 500 or even more years to decompose. The first mention of the problem dates back to 1988 when the formation of a trash island was predicted by the US National Oceanic and Atmospheric Administration.

The oceanographer, yachtsman and heir to the chemical enterprise Charles Moore drew public attention to a strange heap of garbage in the high seas in 1997. Thanks to him, it received the name “Eastern Garbage Patch”.

Having sailed through the spot by accident, Moore could not remain indifferent to this problem. Having sold all his shares in his father’s company, he founded his own environmental organization Algalita Marine Research Foundation (AMRF).

The garbage patch is located in neutral waters, so no country takes responsibility for cleaning it up. Moreover, no country is economically able to cope with the problem on its own. The situation is aggravated by the fact that the patch has a “liquid” consistency, and most of the garbage is one to dozens meters deep.

The Pacific Trash Vortex can be seen as a dead sea, where algae, animal carcasses, wood, shipwrecks, and, more recently, plastic waste swarm in.

You cannot see the “polyethylene sea” from a satellite. You can only see from a ship or when scuba diving. Due to the abundance of rotting masses and the lack of wind, the water abounds in hydrogen sulfide, so there are no large commercial fish, mammals and birds here. For the same reason, ships do not sail here.

Causes of garbage in the oceans

Water is polluted by residential communities living along the river, sea and ocean coastlines. The leaders in regard of the amount of “water” garbage are India, Thailand and China, where dumping waste into waters is has been considered the norm.

Tourists also actively pollute the coastal strip – cigarette butts in the water, tin cans and plastic bottles on the shores, etc. Sailors and fishermen make a big contribution too – their nets are torn, worn out and lost.

Garbage patches are formed under the influence of ocean currents and gyres. Each ocean has its most polluted areas, called garbage patches.

Composition of garbage in the oceanic waters

The major part consists of plastic bottles and other packaging, glass and tin containers, plush toys and other land-based waste. At a closer look one can observe that a significant part of the patch is also garbage from ships and oil platforms:

What is to expect if this problem is not dealt with?

Until the middle of the last century, fishermen used ropes made of natural materials, and when worn, they decomposed in the ocean. Now fishing gear is made of synthetic fibers.

Marine animals trapped in such lost nets can drown, suffocate, starve to death or become prey to predators. In rare cases they drag kilometers of cables with them. Because of its colour and size, marine animals often mistaken plastic for food. It results in their malnutrition. It threatens their overall behaviour, well-being and existence.

Having processed all the available images of northern right whales from 1980 to 2009, researchers concluded that 80% of the reviewed animals were in one way or another affected by ocean debris. More than 500 species of marine life have been affected by the release of waste into the Oceans.

Decaying plastic does not disappear in entirety. It decomposes into smaller and smaller fragments. Plastic particles are so small that plankton, which is food for many animals and which is at the very beginning of the food chain, can swallow them.

The plastic consumed by the zooplankton is passed on and ends up on the human table at the end of the journey. This process is called bioaccumulation:

The damage to the environment is enormous:

In collaboration with Deloitte, the non-profit foundation The Ocean Cleanup with headquarters in Rotterdam, the Netherlands, conducted a research. It estimated yearly economic costs due to marine plastic at $6-19bn USD. The costs are derived from the water cleanups in tourism, fisheries, and aquaculture sectors. The impact on human health and the marine ecosystem is not taken into the cost calculation (due to insufficient research available). Intercepting plastic in rivers proved much more cost-effective than dealing with the consequences downstream. Learn more in the interactive map.

Solutions to the garbage problem in the ocean

It is difficult, time consuming and expensive to remove all the garbage. Humans are not capable of collecting all plastic particles in the ocean, but they can prevent generation of the new particles.

Every year, the US Ocean Conservancy non-profit organization holds the International Coastal Cleanup Day. On September 17, volunteers in over 90 countries participate in the shore clean-up activities. The trash is documented and its impact on the marine life is analyzed and reported to the governments.

Bojan Slat, a Dutch inventor, while still at school, asked himself a question of how to clean up garbage patches and how to turn this problem into the new opportunities for the world. As the currents in the oceans keep moving the garbage along, the young man decided to use it as advantage.

A team of inventors led by Slat proposed to create a facility consisting of a fence that traps plastic waste and a platform where it would enter. The barrier attaches to the sea bottom in a way that marine animals and plankton can move freely underneath it. The debris is steered along the fence to the platform, where small particles are collected by pumps and larger ones are moved using conveyors.

Further, the plastic waste is drained and crushed in a shredder. Garbage ready for transportation is removed by tankers. Next, plastic is supposed to be processed into oil. The sale of oil should cover the cost of this undertaking.

The company was named Ocean Cleanup. With the money raised by the foundation, it built a prototype that was tested near the Azores and at the Erasmus Bridge in Rotterdam. The experiments were successful, but “cleaning up” the Pacific spot is a small part of the solution to the problem. Recycling and cleanup days on the coasts remain one of the mandatory solutions.

Garbage patches are found in all large oceans and seas. Therefore this issue should be addressed by the whole world.

Every year, the world produces over 100 million tons of plastic products for various purposes. 1/10 of this total volume ends up in the oceans. Garbage patches are increasing every year. Only all people together can stop their growth. To achieve this, it is necessary to abandon plastic and switch to reusable containers and packaging made from biodegradable polymers.

Rating
( No ratings yet )
0 107 просмотров
Liked the article? Share with friends:
You may find this interesting
Environmental Issues 0 37 просмотров
Air traffic currently contributes around 3% to 5% to the total anthropogenic warming, depending